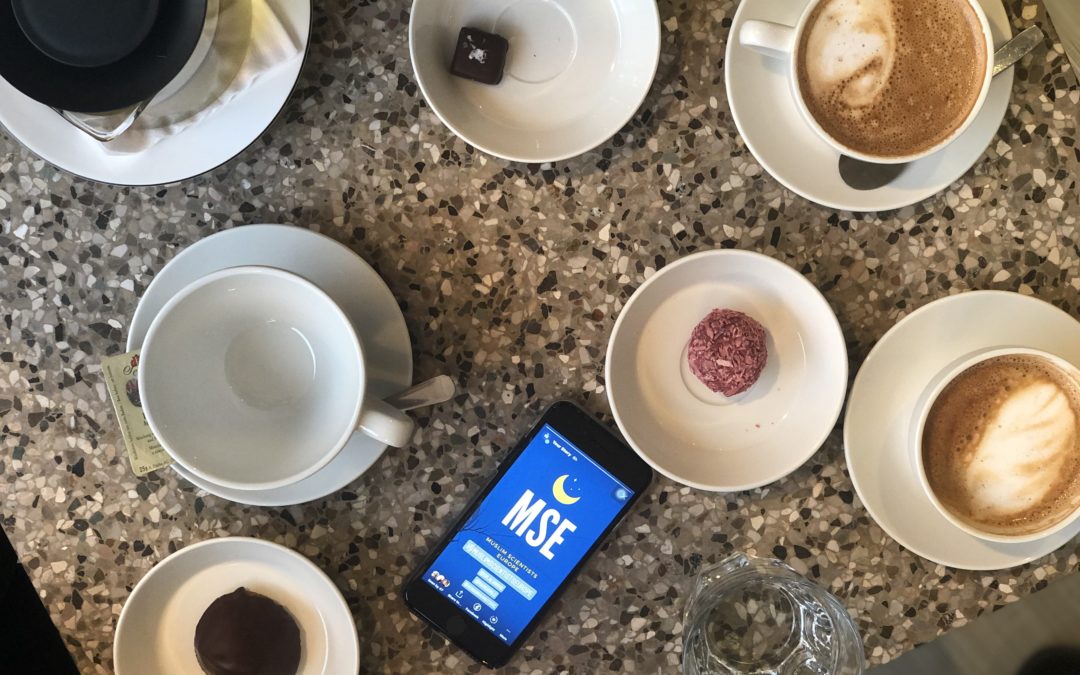 This is a guest post by Alia Amir, Ramis Örlü & Adnan Mahmutović

When our Sweden, our Sverige, our Norden, was transitioning into a semi-quarantine, and our universities metamorphosed into huge Zoom rooms, we ventured out on a walk from the new golden bridge of Slussen over Mosebacke, down to the Katarina kyrka churchyard and other Stockholm South spaces where arty-farty folks meet, to have a chat about our projects, jokes about Corona Morona, crazy fitness-nation, and what was going on in our former homeland Pakistan, Turkey/Germany, and Bosnia. As much as we wanted to avoid the indoors, we ended up having fika at Chokladfabriken. No, we were not as crazy and disregarding recommendations, singing nothing’s gonna stop us now, nor riding on the trend of #supportyourlocalbusiness. Chokladfakbriken was practically empty and we could sit with plenty of space between us. Almost a perfect quarantine. A chocolatine.

The Kashmiri-Pakistani lady Alia Amir had tea, of course. The arty Bosnian-Swede Adnan Mahmutović had some weird purple cake, and our German-Turk Ramis Örlü, aka the turbulence-man, went for the richest chocolate they had.

I came to  Sweden on April fool’s day and had an unexpected culture shock. I was introduced to the tradition of fika, the obligatory coffee and cake with friends-colleagues-family. It took me months to understand it was not a joke, that it was not an April fool. The land of lagom (moderation) was quite nuts about fika.

This year, I was looking forward to ticking off another anniversary of my arrival to Sweden, patiently waiting for the month of March, aka the longest month, to be over. It looked at first like it was going to be unbelievably un-apocalyptic, quite unbelievably lagom. But then Uppsala University shut its doors, went online, and for a moment it looked like we were going to shut down the country like the rest of the globe. Except for fika. Despite the global threat of Covid-19, it felt like I was living on a completely different planet, lala laing to the tunes of lagom-ness and everything is bra! Despite warnings, the rich Åre brigade left beautiful Stockholm for skiing. Trips had been planned. Spontaneity is hell. Åre here comes the Dancing Queen!

Friday night and the lights are low
Looking out for a place to go
Where they play the right music, getting in the swing
You come to look for a king

Back home in Lahore, schools were shut down, the army and the police roamed the city, and my aunt of seventy-five died. Covid-19 did not seem to stop people from performing Muslim burial rituals. At the Janaza, masked people prayed, standing close, but not too close.

My mom didn’t go as she is in the risk zone. I paid my condolences via WhatsApp. I was asked by old uncles where my mask was? In Sweden, only summer takes us “till en annan värld”, not Covid-19! Lahoris are crazy social beings, and the average wedding has two to three hundred guests, so the taming down of Lahoris, the skipping of Janazas, made me take the Covid-19 situation more seriously, but hey that was back home. While I secretly panicked, coughing with some mild symptoms appearing, I wished that the Swedish approach was right! But what did I, a linguist, know? And could Adnan, a writer, know? Maybe Ramis, a real scientist among us, was wiser.

Since I moved from Germany to Sweden sixteen years ago, it felt like my friends from the old Heimat had forgotten about me, like I’d downgraded to a lesser country, except when they got curious about things like this drunk elk that was found in an apple tree near Gothenburg or when elks were trying  to reproduce in someone’s backyard. In Sweden, I mainly thought of my old Heimat wondering whether förbundskansler Merkel would continue to keep Europe together. Was Germany wiser than Sweden? Or I was occupied with the never-ending American election campaigns. And Bernie Sanders for whom Sweden was an example of a good place. Great health service. Free.

Things have changed since the infamous “last night in Sweden” reference by Trump three years ago, but again all eyes were on Sweden since Trump’s remark that “Sweden is suffering greatly”. Suddenly, neither Zlatan’s acrobatic goals nor Sweden’s exemplary daycare and parental-leave system were relevant reasons for my friends to contact me. Instead, the new greeting phrase “#WTFSweden?” became popular.

Thanks to Anders Tegnell, our statsepidemiolog, I became their first-hand source to report live from the place where people live as if nothing had happened and plan their after-ski parties in the (in)famous resort of Åre, where thousands thronged just for the sake of skiing even when hell was loose across the globe! Who the hell can break months-old planning in a country where even the laundry is painstakingly planned a month in advance.

I never had the intention to defend Sweden, a country that shamelessly misuses the word “cake” by associating it with a smörgåstårta (literally: sandwich cake). But with time, I became – unwillingly – a pro bono defense lawyer for Sweden, trying to reflect the 50 shades of handling the pandemic the Swedish way. If hell has broken out due to the pandemics, “Sweden is just hell without any fire” as I recently read on a picture in the gallery Fotografiska. Hence, life appears much more bearable compared to the rest of the world.

But what do I know; I’m not that kind of scientist. I’m the kind that loves sweets and gets insanely curious about this purple licorice cake Adnan bought. Licorice, a rather uncommon sweet for people with Turkish heritage, has become a natural choice since moving to Sweden, in particular, dates covered in licorice. At first sight, two incompatible ingredients have become normalized in the land of fika, just as the indomitable Zlatan. Right?

I miss Zlatan in the times of Covid-19. No matter how far from his home(land) he’s been over the years, far from the North, he is still for me the quintessential Swede. And NO, no Sweden Democrat or any other racist can do anything about it. He came from Bosnia, like me, and did not just make it in Sweden, make it in the world. He made Sweden. A long time ago I wrote an article with the title  “We are Zlatan” trying to show how he changed the Swedish concept of lagom är bäst. Although lagom signifies the middle route, neither too much nor too little, and always according to the law (lag), it has been seen as “lukewarm is best,” as if we Swedes are so different from the heated temperaments of other countries, as if we love lagom, and risk lagom, and hate lagom, and so on. I wanted to show that we are the nation of Zlatan, the golden boy, and we are no longer the country of lagom.

All eyes are on us as we dribble through the Covid-19 landscape. However stupid it may be, Trump’s comments over the years that have been trying to downplay Sweden, which is often used as a symbol against his politics, show the transnational spirit of Zlatan that has taken over us. Zlatan always went his way no matter what. It seems like Sweden has decided to do the same. The deluge of #WTFSweden I get from Bosnia proves it. Anders Tegnell is currently the Zlatan of virology and he is leading the national team in this weird World Cup where scoring and winning is not about quick action but who will outlast and how the game will be played. The sensationalism of Zlatan’s maverick goals, like in that famous game against England, is seen in the Swedish moves in this crisis which some see as crazy and some super smart but for sure no one is thinking our moves are lagom.

I miss Zlatan in the times of Corona. And yet, although he is not here, and he does not need to donate millions to Swedish hospitals like Ronaldo or other famous people had to do in other places, Zlatan is still here. In the end, when the World Cup under the Covid-19 flag is done, there will be judgement, there will be critique and praise, but it won’t change the fact that Sweden has left the lagom land a long time ago. We are still Zlatan.

After the short but sweet fika, we wandered back down to Slussen where the construction work was going on as usual. Some Chinese workers shook their heads at us as we attempted a selfie while maintaining some distance. We wondered if those were the ones who delivered the golden bridge and refused to leave the ship for fear of getting the virus from the Swedes.

We spoke more about other countries. What was China doing? Russia? How about Ramis’ Heimat Germany? We so desperately wished Sweden would win this global game, but then we remembered our favourite scientist Hans Rosling and factfulness.

We wondered if Rosling’s Sweden is at the other end of factfulness this time, in a trance, waiting for the Midsummer night’s dream, singing: So when you’re near me, darling can’t you hear me? S.O.S.!

Alia Amir is a Sweden-based linguist & social interaction researcher currently working at Uppsala University. When not transcribing or writing academic articles, she can be found discovering mundane things in and around Stockholm with a spirit of Robinson Crusoe. She is co-founder of Muslim Academics Europe and Swedish Pakistanis.

Adnan Mahmutović is a Bosnian-Swedish writer who has written extensively on war, refugees, and immigrant experience in diaspora in Thinner than a Hair, How to Fare Well and Stay Fair, and At the Feet of Mothers. He is also a Lecturer in English literature at Stockholm University.

Ramis Örlü is a researcher and teacher in Experimental Fluid Physics at KTH Royal Institute of Technology, Stockholm, Sweden. Since 2017 he also holds an Adjunct Professorship at the University of Bologna, Italy.