How to network in Sweden during summer

If you were not familiar with the Swedes’ attitude to their summer holidays already, you might start to notice that the country is more or less shut down by mid July. The cities are full only of tourists, and a handful of bitter professionals who are still going to work in the morning (and leaving early in the afternoon). If you are job hunting, I can guarantee that not much will happen until the second half of August.

Still, many things happen during the summer months – but elsewhere. In the archipelagoes, in sleepy coastal towns, on Öland and Gotland, in the deep hunting forests of the north, in picturesque villages in Dalarna, under bright night skies; over barbecues, between coffee and cake, on the way back from the beach, during berry-picking sessions. People are introduced to each other, connections explained, important information and recommendations are shared, ideas are discussed, promises made.

You might be surprised to learn that Swedes do love to get to know new people. But in informal settings, preferably whilst taking part in an activity – playing games, making things, doing repair works, driving machines, looking for [berries/mushrooms/mooses to shoot/vintage furniture/knitted baby clothes]. Thus, socialising, or networking, becomes secondary in purpose, but primary in effect. Summer is the time when the surface is blank, but the big deals are made in the deep.

It is, admittedly, difficult to be invited to these closed events, unless you know someone. Don’t expect some random guy on the bus to invite you to their sommarstuga. The big boss of the company you always wanted to work for will not to come up to you and give you a job during a garden party. You have no chances of bumping into the right person by putting yourself on the big square in Simrishamn.

But please, recognise the opportunities, when they come up. If your partner is invited to a boring-sounding berry-picking session with their ex-colleague, do not hesitate to join them! If a former Swedish course mates mentions that you are welcome to pass by their in-laws’ sommarstuga, take a detour from your usual route and accept the invitation for coffee. It is worth the effort. Do take part in another tournament of brännboll next time you are asked to join. Someone needs some help with their sailing boat? This is an excellent opportunity, go for it!

The secret to success? Show your curiosity and be open to try new things.

Are you new to working in Sweden? This book will help you to understand the unwritten and unwritten rules of Swedish work culture. 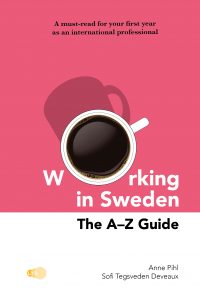 This website uses cookies to improve your experience while you navigate through the website. Out of these, the cookies that are categorized as necessary are stored on your browser as they are essential for the working of basic functionalities of the website. We also use third-party cookies that help us analyze and understand how you use this website. These cookies will be stored in your browser only with your consent. You also have the option to opt-out of these cookies. But opting out of some of these cookies may affect your browsing experience.
Nödvändigt Alltid aktiverad