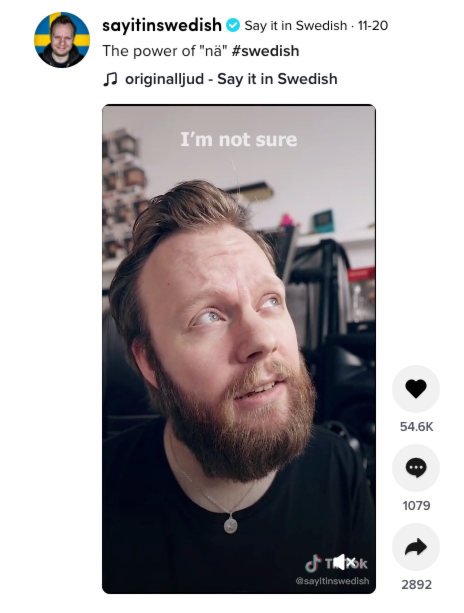 The Swedish language (just like all languages) has its peculiarities. Social media has become a great place for memes that share the funny, obscure, and downright nonsensical. But who makes these memes and how accurate are they? And what do they teach us about Swedish in a snapshot?

You have probably seen this meme, or similar versions, somewhere lately. The different ways of interpreting a Swedish ja (yes), nä (nej), hej (hello) and bra (good). But where did they start? Where do they come from? And how relevant are they for Swedish learners?

The man behind this meme is Joakim, founder and owner of Say it in Swedish, an online platform where you can learn Swedish. He is also a social media star, spreading his knowledge about Sweden and the Swedes to the world. We met him to ask about his recent success with these memes, and what is next on his agenda.

Why were these videos so popular, in your opinion?

I think that extreme examples like these videos can act as interesting and peculiar linguistic tidbits that open a window to the essence and maybe the soul of a language. Although they are, in essence, caricatures, they function as an introduction to the language, like neon billboards that say “Look at me, I’m fun!”. These examples can amaze people, show how different or similar the Swedish language is compared to their own, or how strange, fun, and quirky it is.

There are some similar memes about the Finnish language, and how many forms just one word can take. Finnish is extremely different from most European languages. One interesting characteristic of Finnish is that it is agglutinative, meaning that a word’s ending will tell you which role it plays in a sentence. When the English language uses one word to say “dog”, for example, the Finnish needs dozens. Such extreme examples (although sometimes misleading without context) often make people interested in learning more about languages. On top of that, this type of social media posts are apparently interesting for native speakers as well, if not more, because they have an epiphanic character. Normally your mother tongue is so obvious to you that you don’t realise how quirky it can be. This may awaken a sense of pride and makes you feel like you belong to an exclusive group. This makes this kind of content highly shareable and the potential virality a lot higher than conventional language content, which may appear ‘boring’. When looking at the comments of my viral posts, many native speakers were not only tagging their Swedish friends but also tagging their foreign friends because they wanted to show how cool their language is.

How relevant are these videos for Swedish learners?

I believe that the learners will get the opportunity to get access to information that they wouldn’t necessarily find unless they were directly exposed to Swedish for years.  If you look up standard Swedish interjections in a Swedish dictionary, you learn only the most standard definition, and not the endless variations that come with stress and intonation. This offers learners a shortcut into the language, and it makes them interested in learning more, and especially about how the language is used by native speakers. Obviously, the content of these posts are there to be impactful and shareable, which unfortunately causes them to be short, slightly incomprehensible, and maybe even misleading. At the same time, however, they can show learners that the Swedish language contains some really interesting details that are worth looking into and exploring, which is facilitated by social media, where you can contact the person behind directly to ask questions or make comments.

Your videos spread virally without any accreditation. How do you feel about that?

Now, some people may believe that social media posts are just “something someone said”, making them more prone to be stolen without any repercussions whatsoever. However, sometimes the creator thought and worked hard to create the content and make it shareable and useful. As a business owner, I create content like this to get exposure for my business, not for the numbers per se, but to make my audience aware of what services I can offer. However fun it is to make content like this, the primary purpose for me is to make a living. Naturally, I’m happy when what I have created resonates with people, and I feel flattered, but when others take credit for my work, that’s where I draw the line. For these posts, in particular, I’m torn between feeling annoyed and fascinated. I can see it popping up here and there, with old friends liking it, which makes me proud; people apparently enjoy what I make.

In the beginning, it was amusing to discover my work appearing everywhere, but at the moment I saw another creator’s watermark on it, it felt like someone punched me. The magic was gone. Such posts may seem like something I put together in 10 minutes, but it took almost one whole hour to make one video.  Nevertheless, I think it’s important for people to understand that this is copyright infringement and if you want to share something, the very least thing you should do is to give credit where credit is due. I approached some of the bigger accounts sharing my posts without a source but they showed me the cold shoulder.

I always have too much on my plate, and one of my biggest projects to date is scheduled for 2021. When I started Say it in Swedish ten years ago, I did so because of the lack of useful Swedish learning material, especially in German. I’ve always worked online but will soon publish some new material, in print. This is not a grammar book or any other conventional textbook, but rather a companion, a study buddy, a personal native Swede to keep you company throughout your learning journey.

Where can we learn more about you?