Writing Sweden from America: An Interview with Gil Reavill, Co-Author of This Land is no Stranger 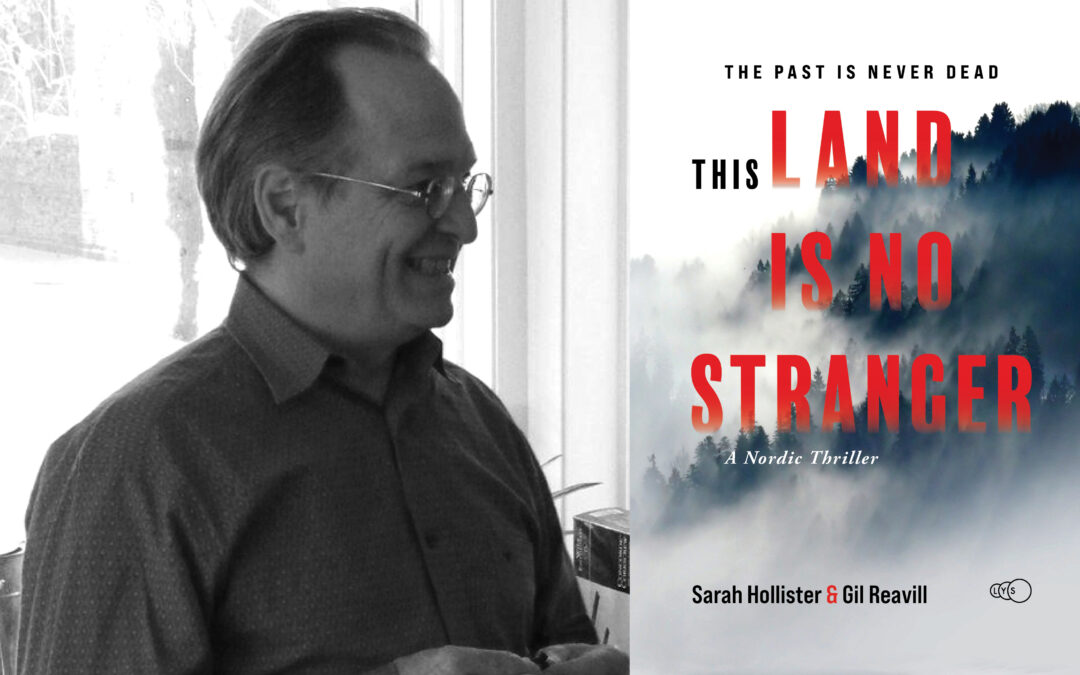 Gil Reavill co-wrote the crime novel This Land is no Stranger together with Stockholm-based Sarah Hollister. What is it like, publishing a book with a small Swedish publishing house, compared to similar experiences in the US?

How did your involvement with publishing a Nordic noir thriller in Sweden come about?

I came to This Land Is No Stranger via my friendship with my co-author, Sarah Hollister. Sarah and I met at the wedding of an American friend in 1985. A few years later Sarah moved to Sweden, and we remained in touch, seeing each other quite often over the years. I attended the New York premiere of her play, Sisters’ Dance, a great success.

Crime displays the human being in extremis, and it has always been a focus of my writing, in works of non-fiction, fiction, journalism, and screenwriting. Crime novels (and especially psychologically astute Swedish mysteries) are very good in featuring the limits of human behavior, emotion, and psychology. Sarah introduced me to Henning Mankell and other Nordic noir writers, and of course the Stieg Larsson books made a big splash world wide.

How did the book’s title come about?

The line is from revered Swedish poet Gunnar Ekelöf: “I am a stranger in this land, but this land is no stranger in me.” The words could easily apply to Sarah, who suggested the quote. She is Michigan-born, a transplant to New York City, now living in Stockholm for almost two decades. It can equally relate to the book’s troubled heroine, Veronika Brand. Not to get too grandiose, but I read the line in a larger sense, too, as speaking to the widespread alienation of 21st century life. And of course, protectionist immigration policies have the effect of posting “no strangers” signs at international borders.

My first-hand experience of Sweden is pretty superficial — a single brief visit that occurred over a quarter century ago. On the other hand, distance has allowed me a certain perspective, in the same way that a first-time visitor might notice things that a long-time resident could overlook because of familiarity. The Midwest, the part of the United States where I grew up, has a robust Swedish immigrant population, so I was introduced in a cursory way to some of the country’s customs and foodways. To our enormous discredit, Americans are notorious isolationists. In my youth, I was generally familiar with such luminaries as Jenny Lind, Dag Hammarskjöld, and Olof Palme, filmmakers like Ingmar Bergman, actors such as Greta Garbo, Ingrid Bergman and Viveca Lindfors, as well as Scandinavian writers such as Ibsen and Knut Hamsun. I believe the salient point here is that Sarah Hollister brings the Swedish element to This Land Is No Stranger, providing the insights into the country that were required in the research and writing of the novel. In my journalism career, I’ve worked several times with detectives from the New York City Police Department, so in our co-authorship alliance Sarah and I could combine our respective spheres to good effect.

What preconceived notions did you have about Sweden that were validated, and which ones were proved mistaken?

Our story centers on a New Yorker, a Queens girl, a detective with the NYPD coming to Sweden for the first time. One thing Sarah and I were interested in — naturally, since we were both born Midwesterners, both transplanted New Yorkers, but with one of us having a foot firmly planted in Sweden — was the preconceived notions that Swedes and Americans have about each other, and perhaps particularly New Yorkers and Stockholmers. How those notions play off one another can be interesting. They can ricochet and throw off sparks. There is a line in the book: “The phrase in English was ‘bull in a china shop.’ ‘A New Yorker among Swedes’ would amount to the same thing.” This refers to a person who ignores the niceties of polite behavior and wreaks havoc in delicate social situations. New Yorkers are often considered to be outspoken, brash, and abrupt. New York City draws a lot of the troublemakers from the rest of America, attracting them to the bright lights and big city. This allows the sleepy little backwaters and small towns to remain sleepy and boring, just the way some citizens prefer it. Similarly, Stockholm attracts dreamers and schemers from all over Sweden. The effect seems to be a little different though. Stockholmers sometimes come off as stolid and self-contained. They aren’t ebulliently friendly as Americans can be, nor are they rude as New Yorkers are reputed to be. Phlegmatic (flegmatisk in Swedish) might be a good word, calm, cool, composed, controlled. There’s a relevant paragraph in the book:

The Stockholm archipelago made for a city of islands and bridges, tens of thousands of islands, skerries, sea stacks, tombolos, islets, and rocks, linked by the most amazing collection of bridges in the world. Brand had come to believe that here was a good correlative for the Swedish people, connected by numberless strong bridges of community and cooperation, but after all separate, independent, immune.

What specific aspects of Sweden have struck you most forcefully?

My biggest takeaway is an appreciation of the diversity of Sweden, not only in regards to its people, but also in its geography. Sarah and I set This Land Is No Stranger primarily in two areas of Sweden which could not be more different: Härjedalen and Stockholm. It was enjoyable to construct the book’s several road trips between those places. Through the wonders of the internet, I actually was able to take some virtual journeys along the routes that Brand and Hammar drove.

Why place the action of This Land Is No Stranger in winter?

The unwritten Hollywood Rule of Thumb is never to set a movie in a winter climate (Nanook of the North, and more recently, Fargo, being exceptions). But Sarah managed to find wonderfully varied ways to describe the Swedish landscape in February. Noting the brutally acute angle of the winter sunlight, for example, or using phases such as “With the morning, the sky had turned sickly blue-white, the color of skim milk.”

What kind of insights did you gain into the national psyche?

Swedes can seem to be a serious people, especially when compared with the whacky ways of my home country, which can be read as goofy, random and—let’s be frank—idiotic. There is a marvelous directness at the heart of Swedish soul. The phrase in English is “do not suffer fools gladly.” It took me a while to catch on to the deep vein of Swedish irony and humor, which goes far beyond the corny Sven and Ole jokes I heard during my childhood in Wisconsin. That said, I now know why Swedish warships have barcodes on them — so they can Scandinavian.

How did the publishing experience differ from what you were familiar with in the U.S.?

Being edited from a Swedish perspective by a Swedish publisher is markedly different from my experience with American publishing. My American editors have been a little flabby, if I can use that term, in that they have tended to allow the author’s ideas, prejudices, and quirks to go forth unchallenged. Letting sleeping dogs lie, I suppose. They embrace the direct association between the words “author” and “authority,” sort of like the auteur theory in cinema. I guess the rationale behind that attitude is that all voices must be accepted in the marketplace of ideas. I found editors at LYS förlag to be more pro-active, vigilant and ever-willing to engage in discussion, particularly with social and community-centered concerns. They tend to kick sleeping dogs awake. Perhaps this also comes back to non-hierarchical atmosphere fostered at work places, where everyone has a voice at the table, where the CEO cleans the kitchen and where the intern might be credited with the next bright idea.